So my original plan was to crack a joke about how I’m going to see a film tonight starring two murderous psychopaths and a heroic woman – and that it wasn’t Batman v Superman: Dawn of Justice.

No, tonight I’m going to see a special screening of The Silence of the Lambs at the University of Stirling’s macrobert arts centre. Because Spring has sprung, and it’s Easter, and the film’s having the word ‘lambs’ in the title makes it a sort of seasonally appropriate choice for this month’s late night cult classic. We’re actually having lamb for dinner on Sunday. I think it’s the first time we’ve had lamb for our Easter dinner. Any other time of year I wouldn’t think twice about it, but when I think of Spring and of Easter I think of all the lickle lambs a-frolicking in the fields, of fwuffy bunnies, etc, etc. With that in mind, I can’t shake the feeling that there’s something pretty dark about tucking into a lamb at Easter.

Anyway, getting back to the topic at hand…

I had my BvS/Silence joke all prepared and I was looking forward to spreading it across social media with maximum smugness. And then, just a couple of days ago, I learnt through a review that there’s a scene in BvS that sounds as if it’s riffing on Silence. The scene in question sounds funnier than any joke I could come up with. Here’s how Devin Faraci describes it in his review:

Pa Kent shows up… in a nonsensical and jarring hallucination/dream/whatever in which Pa tells a story about how he once saved the Kent family farm from drowning, but in the process he flooded the next farm over. Pa heard the screams of the drowning horses in his sleep every night.

Anyone familiar with the Superman mythos will know that, traditionally, it’s Ma and Pa Kent who raise the alien Kal-El as Clark Kent, instilling in him his sense of truth, justice and (when it’s in vogue) the American way. They’re the people responsible for making him ‘human’, for giving him his moral code and his overall sweetness and decency. They’re the reason why he doesn’t grow up to become a super-douche like General Zod, lording it up over human ‘ants’.

Anyone who thinks of the Kents in those terms and who has seen Man of Steel will also know how weird, creepy and bizarre that film’s take on Pa Kent was. Luke Miksa calls it ‘The Biggest Problem with “Man of Steel”’. It’s certainly one of the most egregious. In a flashback scene young Clark asks his Pa whether he should have let his classmates drown, rather than risk anyone discovering his secret superpowers. Pa shrugs. ‘Maybe.’

And then, of course, there’s the infamous tornado scene. People are still trying to make sense of it, ignoring the fact that it makes absolutely no sense on any level. As someone who still sheds a tear over Pa’s heart attack in Richard Donner’s Superman, and that scene where Clark hugs his Ma in the cornfield, it was pretty frustrating at an emotional level (not that the film deals in any recognisable human emotions). The death of Costner’s Pa echoes, of all things, the ending of Batman Begins (‘I don’t have to save you’), another superhero film scripted by David S. Goyer. The film then goes on to align Superman with Heath Ledger’s Joker during an interrogation scene that harks back to 2008’s The Dark Knight. But why choose to interpret the Superman mythos in such a perverse, cynical, nihilistic way? When you consider his upbringing in Man of Steel, and when you consider that his Pa values self-preservation over saving a bus load of screaming, drowning school kids, it’s no surprise that Man of Steel’s Superman grows up to be a creepy, sneering sociopath. The real wonder is that he didn’t torture small animals as a child and grow up to be the current cinematic DCU’s answer to Buffalo Bill.

By most accounts Wonder Woman is the only character in the film who’s actually been depicted as a hero, something that audiences have – surprise, surprise – responded well to. She shows up to save the day, to fight the good fight against the actual bad guys, not to indulge in the clash of the two supposedly ‘good’ guys, who sound like little more than a couple of meat-heads. (As a Batman fan I’m taking some consolation from reports that Ben Affleck’s Batman and Jeremy Irons’s Alfred are getting some good press. Hopefully they’ll get a chance to shine in a solo Batman film that ignores BvS). Today’s audiences may be getting the Superman they deserve, but he is not the one they need right now… 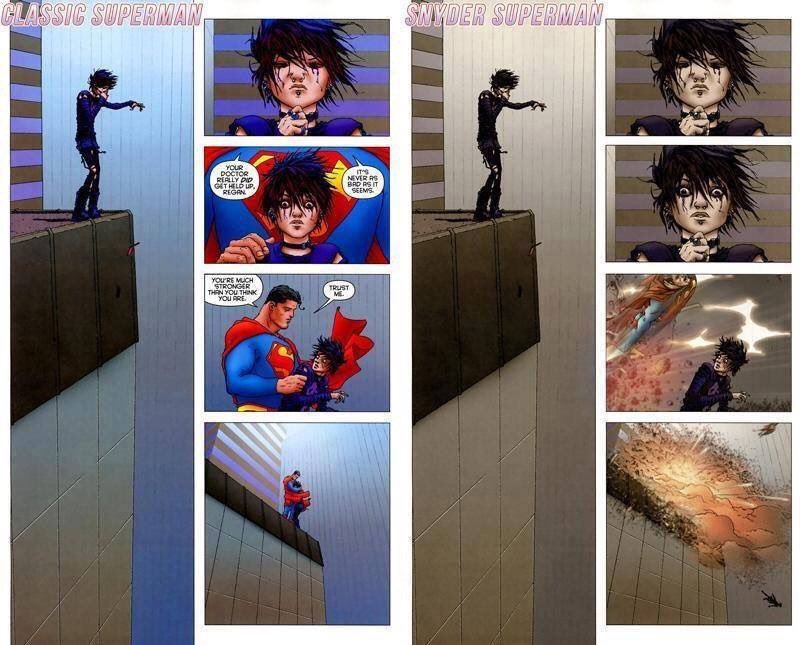 One thought on “‘Well, Kal-El – have the horses stopped screaming?’”

Hello! I'm James Campbell, a writer with an academic background in English Studies (1st class BA Hons, University of Stirling, 2009) and "The Gothic Imagination" (MLitt with distinction, UoS, 2010). Through "Elf in the Machine" I'll be providing my two cents on the American/global Weird, Gothic, Horror and Magic Realist media that have aroused my curiosity. View all posts by James Campbell